What is Horsepower and Why Doesn’t it Tell the Whole Story?

Home / Car Blog / What is Horsepower and Why Doesn’t it Tell the Whole Story? 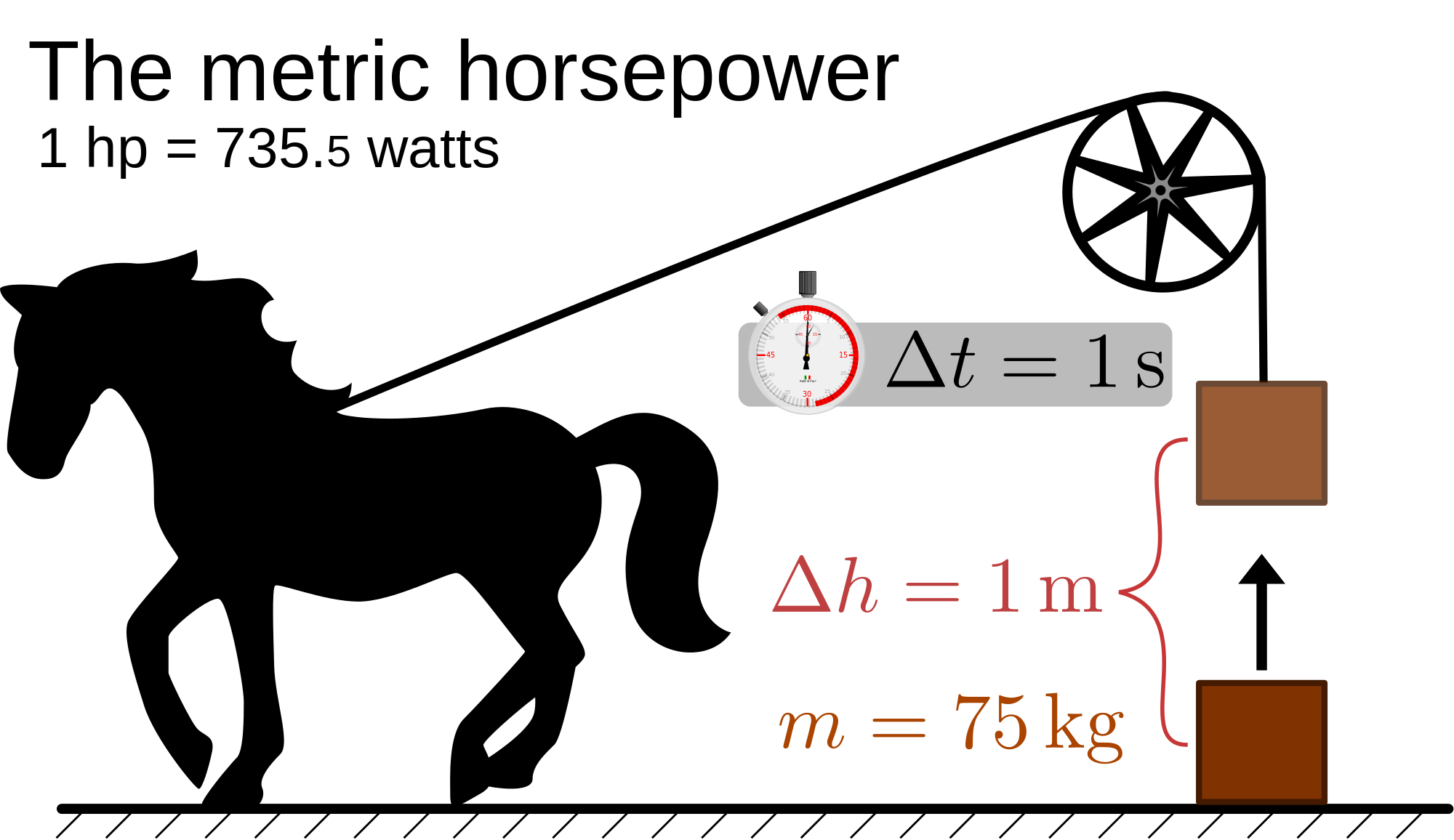 What is Horsepower and Why Doesn’t it Tell the Whole Story?

A horsepower (HP) is a unit of power that was created to compare the power output of steam engines with the power of draft horses. Yes… that’s right, steam engines and horses. It is derived by taking the torque produced by an engine, multiplying it by the RPM and dividing that by 5252. In theory, this number could produce a number that could be used to cross compare different engines on a level playing field.

To an extent, this is true. Because HP is calculated the same way for each engine, it can be a useful way to compare the power output of each engine… however… it doesn’t mean anything.

A horsepower is a unit of measure that is used to determine how much work an engine could do. For instance, 2 HP is approximately equivalent to how much work you could get out of two horses over four hours. Work can be applied in a number of ways… to make something go faster or to make it lift or push more. What the number by itself will not ultimately tell you is how fast something can be accelerated or the top speed at which that acceleration will be equal to the forces that are trying to slow you down.

So, let’s talk about horsepower for a bit. First off, the BHP (Brake Horsepower)… produced by an engine at its crank is virtually meaningless. What do I mean by that? I mean that it tells you nothing about an engine. Consider this… you have two engines, one gasoline, and the other diesel. Both produce 300 HP at the crank. Which engine is faster? Answer: Neither. HP is not a measure of speed nor does it tell you anything about how fast the engine will reach its maximum HP. BHP doesn’t tell you is how fast the crank is rotating. Engines that were designed to create a large amount of torque will tend to have much longer strokes… longer strokes = more travel distance = lower RPMs. Engines designed to accelerate quickly tend to have much smaller strokes and operate at much higher RPMS.

BHP will not tell you anything about the gear ratios in the powertrain that takes the torque produced by the engine and turns the wheel. Lastly, BHP will not tell you how much work is being bled off by the powertrain system to turn those parts. In other words, short of knowing how much relative work an engine can produce, it really doesn’t tell you anything about the car. Ask yourself a question, what is faster? A 348 HP Genesis Coupe or a 175 HP Honda CBR1000RR motorcycle? A 3.8 Genesis Coupe can complete a quarter mile in an average of about 13.5 seconds and accelerate to 60 MPH from a standstill in about 5.4 seconds. The CBR1000RR, on the other hand, can complete that 1/4 mile in about 9.7 seconds and accelerate to 60 MPH in about 2.6 seconds.

Wait… whut? If HP is the end all be all of determining how fast a vehicle can travel, why is it that the Honda motorcycle can beat the pants off of a much more powerful Genesis Coupe? There must be more to this than simply comparing HP to determine how fast a car can go.

There are a number of things that affect how fast you can accelerate and what your top speed will be.. Power to weight ratio, torque curve, drag, gearing, and RPM being the main variables.

Power to weight ratio – Part of the reason why the motorcycle can accelerate faster and have a much higher top speed than the Genesis Coupe has to do with the fact that there are fewer demands being imposed on the engine by virtue of its sheer mass. Let’s take supercars as an example. A 2015 Lamborghini Huracan LP 610-4 produces about 602 HP at the crank. It can accelerate to 60 MPH in 2.8 seconds and complete a 1/4 mile in 10.6 seconds. A 2013 Ford GT500 Shelby Mustang produces 662 HP at the crank and can only accelerate to 60 in 3.6 seconds and complete a 1/4 mile in 11.6 seconds? While other factors play into this… what is the disconnect? A car that makes 60 HP more power is slower than a car that wasn’t even designed to be a drag car? The Lamborghini weights in at about 3,135 lbs while the bulky Mustang weighs in at 3871 lbs… about a 736 lb difference. To determine the power to weight ratio, you must divide the weight by the power… or.. in the case of the Lambo… 3135/602= 5.2 lbs per HP vs the Mustang 3871/662= 5.8 lbs per HP. In other words, the Mustang’s engine has to push more weight around than the Lambo. The work that goes into pushing that weight diminishes the amount of work that can be used to accelerate the car.

Torque Curve – Torque is the amount of rotational force.  HP is how that torque is applied over time/distance.  However, peak torque does not really tell you the whole story, you have to look at the torque curve… or how torque is being produced throughout the engine’s power cycle.  The torque curve is determined by how the engine produces torque. Acceleration depends on how fast torque can be applied to the wheels and how long it can be sustained. An engine that can produce a moderate level of torque down low, but sustains that torque through its RPM range is going to be able to accelerate much faster than a car that produces a little torque in the low RPM range and a high torque in the upper RPM range in the 0-60. Engines that have smaller strokes (like the V10 Huracan in the example above) have extremely short strokes; however, makes up for the shorter strokes with more pistons turning the crank. The Mustang’s heavy V8 has much longer strokes which produce large amounts of torque but initially turn the crank more slowly. So, while the Huracan produces a mere 413 lb-ft of torque to the Mustang’s massive 631 lbs-ft, it delivers most of that torque almost immediately and sustains that delivery through its 9,000 RPM range. The Shelby doesn’t hit its torque peak until 4000 RPM and tops out at 6250 RPM.

Drag – Drag is the force that resists movement. This is the force that essentially keeps objects that are not moving at rest unless an external force is applied to that object. To produce forward motion of the car, a car must first overcome the forces of drag. To sustain a given speed, the engine must continue to produce the same amount of power to counteract the forces of drag acting upon it. The faster you go, the more drag that you encounter, the more power you need to sustain your speed. This, more than anything else determines how fast you can go, but it also will have an impact on how quickly you can accelerate. Drag can come in many different forms… include the aerodynamic drag of the air pushing against the car as it moves forward, the rolling resistance of the wheels on the pavement, or the mechanical drag within the powertrain of the car itself (friction). All these things contribute to bleeding off power to maintain a given speed and reduce the amount of power available to accelerate.

Gearing – Gearing determines how the torque is delivered to the wheels where the work is being done. a 1:1 gearing ratio means that for every rotation that the engine makes, the drive wheels will complete one rotation. As the gear ratio increases, more torque is delivered to the wheels; however, at a sacrifice of RPMs. For instance, on a second-generation Genesis Coupe manual transmission, the gear ratio of first gear is 3.848:1. This means that the engine will reach it’s RPM limit much faster; however, the torque delivery is mechanically multiplied by the same amount. As you shift further up in gears, the ratio drops… 2.317:1 in second, 1.652:1 in third, 1.233:1 in fourth, 1:1 in fifth, and finally 0.834:1 in sixth. While the torque delivery is reduced as you get into higher gears, the RPMs drop to allow for more headroom (speed). Dyno graphing or baselining the power of the car should always be done in a gear where it is closest to the 1:1 ratio… in other words, 100% of the torque produced at the crank is delivered to the wheels. When the engine makes one rotation, the drive wheel makes one rotation… kinda.

RPM – RPM is half of the HP formula. Torque is the other half. In order to determine the total work that an engine will produce, you have to multiply the torque times the RPM. The amount of torque required to maintain a level of work decreases as RPMs increase. If we maintain the torque as RPM increases, we increase the HP levels. If we are concerned with top speed, we want the most amount of work to occur at the highest RPM levels that the engine can safely run… if we are interested in accelerating the car quickly from a stop, we want our torque peak to occur at the top speed you wish to attain by the time you reach 60 MPH (if 0-60 is your goal) or at the point where you reach a 1/4 mile (if 1/4 mile times excite you). The torque delivered at the desired RPM can be manipulated in a number of different ways, such as changing the stroke of the engine, the Cam timing, or even by manipulating the exhaust system to optimize scavenging of exhaust gasses at a given engine speed.

Okay… so now I know all this stuff, what can I do with it?

Knowing what makes a car fast means knowing what you can mess with to make it go faster if this is your desire. While you can increase the HP output of the car to make it go faster, there are other things that you can do to get more bang for your buck. Lighten the weight, reduce your drag, change your final gear ratio, increase your RPM limits through proper engine balancing will all yield faster times.

The other thing you can do with this information is to stop fooling yourself into thinking that HP is the end all be all of the speed equation. It is not. HP alone means nothing and cannot be used to calculate how fast a car can go. If you focus your attention on just one factor, you limit the possibilities of making a much lower HP car go faster and you’ll be left scratching your head wondering how a Mazda Miata keeps tearing you up in races.

About the author: Bob

I am a 21 year retired Army veteran with a background as a CH-47 helicopter Flight Engineer. For the past 5 years I have been a Genesis Coupe enthusiast and am currently a Moderator and Contributor for GenCoupe.com Forums, author of the "The Ultimate Genesis Coupe Newbie Guide to Modding", and the "Ask a Geek" sub-forum. Additionally, I am an administrator and event organizer for GenSport United as well as several other groups on Facebook. While I do not pretend to know all things with regard to the Genesis Coupe, I have dedicated a substantial effort to learn as much as I can and share it with whoever will listen.

Do You Need Colder Spark Plugs?

Will these wheels fit?

What does a tune do?

Hooning and track days make you a better driver

How much HP does that make?

Do I need a tune?