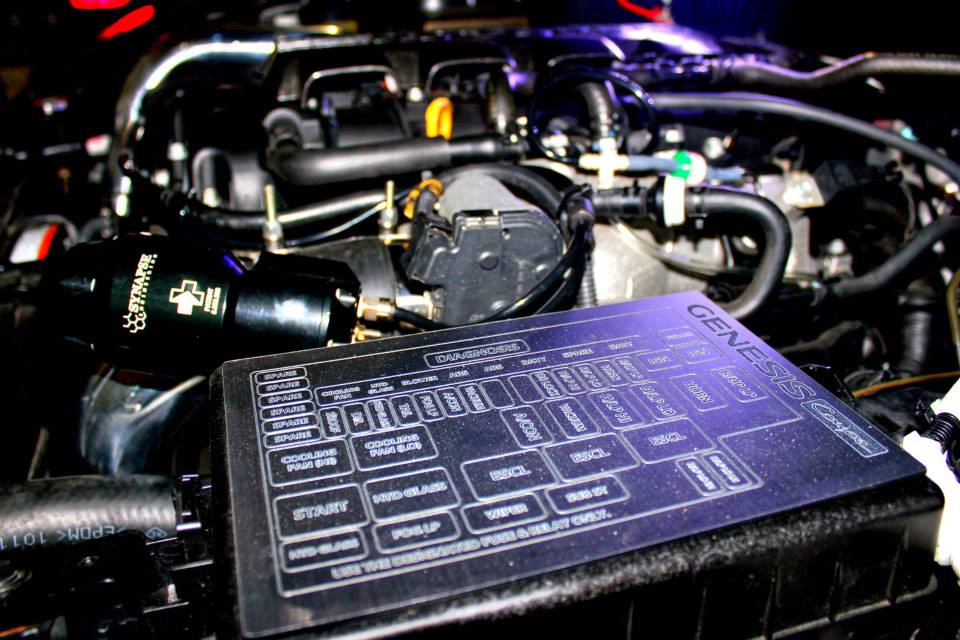 This is what has been shared in the GenCoupe forums since 2009…”if you want power out of the can… get a 3.8. If you want to mod, get a 2.0T”. To this day, this basically holds true. The 3.8 is a modified SUV engine. It has cast internals and cast pistons. Although it is cammed to push the power band up in the RPM range, it’s not well suited for staying up there. In fact, there is an oil starvation issue at higher RPMs on the 3.8. If you stay in the stock RPM range, you are fine…. go above it and you may find yourself with a spun bearing or two.

The 2.0T was designed as a turbo engine from its inception. Hyundai had a bit of a learning curve correction between the BK1 (2009-2012) models and the BK2 (2013/14) models and strengthened the internals of the BK2 to handle higher power levels.

Making more power comes down to one basic component… you have to process more air/fuel. In NA engines like the 3.8, this often involves things like more aggressive tuning, more aggressive camming, opening up airflow restrictions, and lastly, forced induction. Keep in mind that the 3.8 was not designed to be a forced induction engine… it has high compression pistons… and the cams are not ideal for forced induction. this means that you are pretty much limited to staying under 8 PSI of boost unless you rebuild the engine for higher boost levels.

To get more power on the 2.0T, you simply have to increase the boost. Yes, the NA things will work on a 2.0T, but you get far more bang for the buck by increasing boost. This is the reason why 2.0T tunes will yield far more power than 3.8 tunes. The stock turbo is capable of producing more boost than the manufacturer tune uses… so simply turning up the boost and advancing timing can yield up to 100 HP increases with only a minor investment in supporting modifications.

The 2.0T was marketed by Hyundai as a “tuner” car, even though they really had no concept of what the “tuner” scene was all about. I think they figured that when folks “tune” a car, they change the intake, exhaust, and throw on new wheels and they’d be done. Hyundai had effectively locked down their ECU and didn’t anticipate that anyone would break the code on it and change the stock tuning parameters. They were wrong. Although the Genesis Coupe tuning market didn’t explode (in part because Hyundai didn’t really understand the market), the 2.0T did get far more support and love than the 3.8 by the aftermarket. What this means is that there is support for 2.0T engine parts… cams, lifter springs, pistons, rods, cranks, turbos, exhausts, and intake manifolds. In other words, you have far more choices with the 2.0T than the 3.8 in terms of what you can do with it and how much it’s going to cost you to get it done.

Lastly, keeping in mind that the tuner aftermarket is really in the business of making money (and not just supporting a platform), a number of aftermarket accessories available are directly proportional to how much money the community is willing to spend on said parts. Our community, as a whole, is filled with a bunch of cheap SOBs who are unwilling to pay good money for good parts. As a result, only the strongest manufacturers (supplied with Made in China parts) and vendors have been successful at surviving within this market space. For most innovators, it is not worth the investment to modify their existing line to accommodate a community where they are barely going to be able to make their margins. While snowflakes complain about the lack of aftermarket support given to our platform, they are unwilling to unass the cash to provide the incentive to manufacturers to support our community.

A fully bolted-on and modified tuned 2.0T will make more power than a fully bolted and modified on 3.8.  The power curves between the 3.8 and the 2.0T are very different because the 2.0T will be producing a very large amount of torque much lower in the RPM range and the 3.8 will have more pull in the upper RPM ranges. The differences between the two engines are smaller in the BK2 line than in the BK1 line.  At the end of the day, the choices between engine platforms come down to what was said in 2009… if you want power out of the box, get a 3.8… if you like to tinker… get a 2.0T.

About the author: Bob

I am a 21 year retired Army veteran with a background as a CH-47 helicopter Flight Engineer. For the past 5 years I have been a Genesis Coupe enthusiast and am currently a Moderator and Contributor for GenCoupe.com Forums, author of the "The Ultimate Genesis Coupe Newbie Guide to Modding", and the "Ask a Geek" sub-forum. Additionally, I am an administrator and event organizer for GenSport United as well as several other groups on Facebook. While I do not pretend to know all things with regard to the Genesis Coupe, I have dedicated a substantial effort to learn as much as I can and share it with whoever will listen.

Do You Need Colder Spark Plugs?

Will these wheels fit?

What does a tune do?

Hooning and track days make you a better driver

How much HP does that make?

Do I need a tune?